The Discovery ; The Beginning of A Worldwide Sensation...

On the sunny afternoon of September 19, 1991, two hikers, Erika and Helmut Simon made the decision to take a shortcut off-route, where they discovered what was soon to be a 20th century archaeological sensation. The discovery of the Iceman occurred approximately at 1.30pm on the Ötzal Alps, South of Tyrol, Italy, where the corpse was found with its chest resting against a flat rock. At first, this corpse was thought to be of a modern tragedy but after further investigation, it presented itself to be a doorway into the ancestral past. A memorial now lays in the position Otzi was found.

To dig deeper into the story of the find & recovery, click here.

Posted by otzi-icemanofthepast at 03:20 2 comments:

What do the Iceman's Belongings Reveal About Himself & His Society?


As the Excavation continued, item's belonging to Otzi were eventually being revealed. These items significantly allow us, as the future generations to explore the past world of which Otzi lived in. Two insightful items found with the Iceman include: 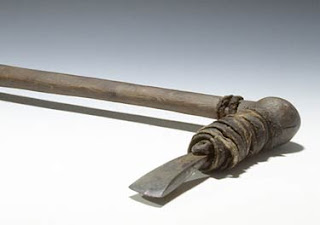 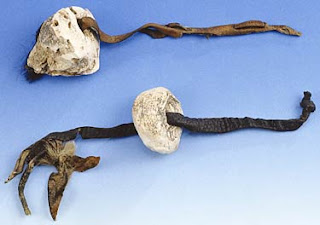 To find out more about Otzi's equipment and clothing found with his body, click here.

Posted by otzi-icemanofthepast at 03:17 4 comments:

How was the Iceman Killed? ; Changing Interpretations of the Cause of Death...


Over the years since the discovery of the Iceman, there have been constant debates and struggles to obtain the exact cause of Otzi’s death. Many theories have been suggested over time but have always been proven inaccurate by a newly further developed theory. Through the use of the abundant range of technological devices, scientists have been able to deeply explore the Iceman’s corpse gaining insights which may have affect Otzi’s death. With each discovery opening up new clues and information, scientists embark on an arduous journey to seek the cause of death of Otzi, the Iceman.
The photos of the original find of the Iceman, were used as the first resources to determine how the Iceman’s life might have ended. With the copper axe placed carefully against a rock, archaeologist Konrad Spindler suggested that it was most probably put there by Otzi himself and everything was in its original place. Examinations of the ice also contained pollen which indicated that Otzi could have died in autumn and together with this evidence, scientists were able to conclude that the Iceman may have been caught in a storm and died of hypothermia.
As the corpse was subjected to X-rays and Computer Assisted Tomography Scans which revealed what appeared to be unhealed rib fractures. The Disaster theory surfaced, suggesting the iceman was some kind of shepherd returning to his homeland in the autumn. It was believed that Otzi had faced an argument or battle which led to the fracturing of his chest, before he escaped. A cut on his hand also supports this, where he most probably had used his hands in defence. Drained of energy from his injuries, the iceman had laid down to rest on the Alps, where he was engulfed by hypothermia and died.

After being brought to an Italian Museum, Otzi’s was recreated by forensic pathologist, Peter Vanezis. As many others did, Vaezis had questioned the theory of the Iceman’s death. Hornbeam pollen in the intestines indicated Otzi’s death was during spring and examination of the ribs showed the fracturing had occurred after Otzi’s death. This new information had brought scientists back to where they had started.
In June 2001, an x-ray revealed a peculiar arrow like object lodged into Otzi’s shoulder. This object was discovered to be denser than bone and was concluded to be a stone arrow head which had not been noticed despite the ten years of intensive study. With the unexpected discovery of this arrow head, past theories have been refined to explain the presence of the arrow head which had managed to penetrate his shoulder bone. Theories now state Otzi had been chased and shot by an arrow of which he himself had extracted, or the attacker had extracted after the shot.  Exhausted from energy and drained from bleeding, Otzi could not continue further and therefore lay down and subjected to death. Evidence of traces of blood in Otzi’s brain also reveals the fact that Otzi had suffered head injuries prior to or after his death. The blow to the head may have resulted in a finishing attack by the attacker or Otzi may have hit his head on a rock after falling to his death. 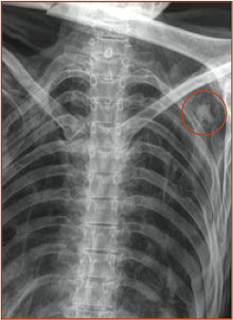 Recent investigations have allowed scientists to gain a new perspective of the Iceman’s cause of death. After extracting the stomach contents of the Iceman, about half a pound of food was found in total inside this organ, which had sat almost as high as his chest. These food remains consisted of grains and meat of a wild goat which still may be evident on the Alps today. This food had not had enough time to digest, which indicates the Iceman had met his death soon after this last meal. when considering this evidence, it would be unusual for the Iceman to be on the run from his attacker if he had time to sit down and eat this meal. Therefore new theories have be hypothesised of that the Otzi suffered a surprise attack of which he did not expect, possible from someone he knew, of his own community.
The cause of the Iceman’s death will never be certain, but clues from the body and equipment have allowed scientists and archaeologists to take steps closer into the possible reasons and ways which ended the life of this historical ancestor.

To read about more theories proposed about how Otzi died, visit this website.

Posted by otzi-icemanofthepast at 03:09 9 comments:


As with all archaeological human remains found and investigated, the issues of custodianship and ownership as well as the ethics involved lie alongside it.


After the three long and difficult days of recovering the Iceman’s body, the request of the public prosecutor brought the corpse to the Institute of Foreign Medicine in Innsbruck, Austria for investigation. Soon after recovering this historical mystery, rumours arose, in regards to the discovery of the Iceman being on the Italian side of the border, rather than the Austrian soil as originally assumed. This border question posed triggered a new survey  to be carried out which confirmed the find of the Iceman was 92.56m from the border, on the side of South Tyroi, Italy. This led to the claims of property rights by South Tyroi, although they had allowed the Innsbruck University to retain the corpse until they had finished with their scientific investigations. In 1998, Otzi was returned to his rightful home Italy where further investigations were conducted.


As with displaying any other ancient human remains, ethics are a vital aspect to consider. With the Iceman being oldest stone-aged body intact, it was certain that ethical debates would arise and therefore, great importance was paid to the restraining display of the body. The Iceman section of the museum possesses a very scientific and tranquil atmosphere where architecture and presentations remain simple in order to allow the importance of the body to successfully dominate. The display is sectioned off into a special exhibition room which gives visitors the chance to view the body only if desired. There is a 30 x 40cm opening of which viewers can obtain a clear image of the mummy and many systems are installed to carefully monitor the Iceman. All other equipment discovered with the Iceman has also been carefully replicated to ensure the original do not suffer from any damage. The display of the Iceman took ethical issues into great consideration which allows the viewing of the ancient ancestral body to be respectful and the body itself to be respected.

Posted by otzi-icemanofthepast at 02:59 No comments:

Posted by otzi-icemanofthepast at 02:49 2 comments:

otzi-icemanofthepast
Take a step into the past as you embark on this historical journey to discover the wonders of this ancient sensation and famous discovery of Ötzi, the Iceman. - Caroline Tran ; 11AHI2